Central Australia with its famous township of Alice Springs and the spectacular nearby scenery of places like Uluru (Ayers Rock) and Simpson's Gap is the hub of Outback Australia. The township of Alice Springs is situated exactly halfway between Adelaide and Darwin and over the last century and a half has been a vital network between north and south, particularly during World War Two when the northern city of Darwin and the western coast was being attacked. It was also a major link for the Overland Telegraph Line finished in 1872 connecting Adelaide and Darwin to Great Britain, quite a feat for its time.

The local Arrernte people are one of the largest communities in Australia and still use their native tongue, it being taught in schools and often used in the media. The historic culture of the Arrernte is full of the powerful forces that drive life in the centre, the mountains and waterholes, the wildlife and the desert. There are a number of cultures who have found there way here though with Vietnamese, Chinese, Thai and Indian represented. It is also home to a large number of American as well as Australian workers who are stationed at Pine Gap, the joint US satellite tracking facility about twenty kilometres south-west of Alice Springs.

There are exciting events in 'the Alice' like the uniquely famous Todd River Regatta, where grown men and women run on the dry river bed that winds through the centre of Alice Springs, carrying their strange contraptions that are supposed to resemble boats. When the Todd River actually has water in it all preparations for the Festival are thrown into chaos as real boats need to be used. Either way, it is a boat full of laughs and well worth the experience.

There are numerous guided tours that operate through the Red Centre; and for vehicles the roads are very drivable though caution at certain times of the wet season is needed. An aerial view from a scenic plane or helicopter flight confirms just why the term 'red centre' is used. Modern accommodation provides relief from the hot dusty days or sleeping out in the desert on one of the many camping tours can be fun. The Ghan Railway service that finally linked Adelaide and Darwin in 2003 will bring you right through Alice in pure comfort while the spectacular scenery glides past the window.

Most of Australia's central and northern arid regions are regularly watered by the seasonal monsoon rains which dump water on Australia's 'top end' during the summer months from late September thru to as late as March. It is from these rains that the waterholes and streams are regularly fed and all along the impressive parallel lines of the MacDonnell Ranges the gorges are home to refreshing billabongs and shady sanctuaries from the heat. Glen Helen Gorge, Simpsons Gap and Ellery Creek Big Hole are some of these and it is easy to see why the Indigenous people considered them very important to their lives and societies.

Central Australia is no longer a separate territory, as it was from 1927 to 1931, but was re-united with what was then North Australia to make up the Northern Territory; the term Central Australia though has remained to describe the surrounding region to the north and south of Alice Springs. 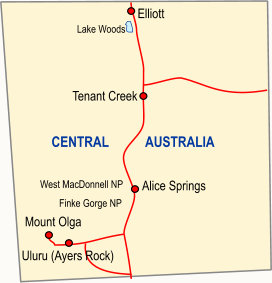