Australia has some of the most tasty fish in the world

Open deep sea or enclosed waters - fresh water and rivers with fish in them that big, you will not believe it until you see them for yourself.

To mention every fishing spot in Australia would be almost impossible. Australia has some 36000 Kilometres of coastline and some of the best eating fish like sand flathead, whiting, and bream to mention only a few. Many are caught right of the BEACH and just about all the capital CITIES in Australia are situated right on the coast line and not far from the ocean where fishing spots are handy.

Placing the words "Fishing in Australia" into the Google search bar brings up about 156,000,000 results, so to say Australians like to go fishing is somewhat an understatement.

In the last five years a great number of websites have been placed on line dedicated to Australian Fishing.

The Black Marlin jumping out of the water on the following site is really something!

NOW! That's what "going fishin" is all about MATE!

Young and old find suitable fishing spots in rivers, lakes, waterholes and favourite seaside haunts all over the country and there is usually a 'Bait Shop' in most towns whereby a travelling fisher-person can find out where the best local fishing holes are and what bait to try.

GEAR UP FOR FISHING AT TRIZILY.COM

"Congratulations, you decided to take up the greatest sport on the planet! Now you need to get geared up to hit the water. This can be confusing and overwhelming when looking at the thousands of different fishing products on the market. Now we will show you how to get started."

• Wear a Life Jacket at All Times

• Tell Someone Where you are Going

• Don't Turn Your Back on the Ocean

Do Not Put Your Life On The Line 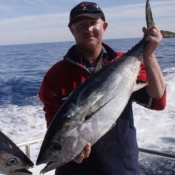 Australia is also famous for our crustations, oysters and mussels and don't forget the 'muddies', that is, the mud crabs and Balmain bugs, "Yum".

Most people will remember, from the television commercial with a famous Australian Mr. Paul Hogan, the statement he made, "I'll just put another shrimp on the Barbie"!! Of course he was talking about the Bar-B-Que not the doll. Do you remember the giant sized Prawn or shrimp? Well you get them here in Australia.